A larger version of the giant yellow Rubber Duck that captivated tens of thousands people in Hong Kong recently is expected to arrive in Taiwan’s northern city of Keelung later this year.

“Our beautiful Port of Keelung will be home to the yellow duck from the end of December to the end of January,” Keelung City Council Speaker Huang Ching-tai (黃景泰) said at a press conference on July 24.

Huang said he has signed an agreement with the creator of the giant rubber duck, Dutch artist Florentijn Hofman. Hotfman has agreed to build a new, 18-meter-tall version of the rubber duck, three meters taller than the duck recently displayed in Hong Kong

The huge duck is expected to go on public display around mid-December and will remain permanently in Keelung, Huang said.

Several localities in Taiwan tried to win rights to the “Rubber Duck,” and in the end, Hofman awarded it to Keelung.

Huang believes duck fever could sweep Taiwan as it did Hong Kong and can draw many tourists to Keelung.

During its previous one-month tour in Hong Kong, the duck attracted thousands of tourist-visits and high revenues. Local businesses benefited by selling not only duck toys but also duck-themed foods.

The creator of the giant rubber duck, Hofman, has said he tried to entertain the world with his giant duck creation.

He aimed to recall everyone’s childhood memories by exhibiting the duck in 14 cities, starting in his own Amsterdam, Netherlands.

Since 2007, in a tour named “Spreading Joy around the World,” the duck has graced the waters of several cities across the globe, including Sydney; Osaka, Japan; St Nazaire, France; and Sao Paulo, Brazil.

The 36 year-old Hofman is known for playful urban installations such as the Rubber Duck. 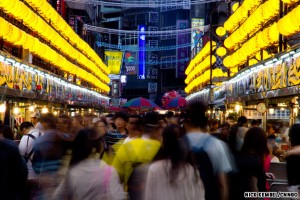 The crowds account for 50 percent of Keelung night market’s charm.
Northern Taiwan’s largest port sees few tourists, which is just one of many reasons to make the short trip over.

The hill in Zhongzheng Park is a great place to start. It is a vantage point for surveying Keelung city and the surrounding ocean.

Zhuputan Temple at the top of the hill is the focal point of Ghost Month activities in Taiwan held in the seventh lunar month.

Next to the temple, you can enjoy the view from a slightly surreal Buddhism-themed children’s amusement park, which includes a 22-meter-high Kuanyin statue with stairs leading up to multiple floors inside.

In the afternoon, choose between a boat trip to the cliffs of Keelung Island, or a visit to Yehliu, a windswept cape featuring hoodoos and other rock formations.

Hungry yet? Finish up at one of Taiwan’s best night markets.
Named Miaokou, or “temple entrance” after the fine temple at its heart, this market is also one of the most visitor-friendly markets in Taiwan, with English signage indicating each stall’s specialty.

Complete with the crowds that make strolling in night markets one of Taiwan’s defining experiences, this is one of the best places to take part in “re nao” or “hot and noisy atmosphere” — a sure marker of a good time.

Getting There: Frequent trains depart Taipei for Keelung. A number of private bus companies also operate buses to Keelung from Taipei Main Station, or from bus stops along Zhongxiao East Road. Ferries to Keelung Island depart from Bisha Harbor and buses to Yehliu leave from near the Keelung train station.